Let customers speak for us

Great saree and fast service! Fitting was great as well aside from the sleeves. Sleeves were a little loose but can get it fixed easily. Overall, very happy with my purchase. Will order more in the future! Definitely recommend.

Now, I will say, I have never owned a saree in my life. I am not an expert on what these are supposed to be like. However! From a knowledge of garment fitment, quality, and beauty? This piece absolutely hit the mark. The color is beautiful and true to the listing (as much as an image on a screen can be), and I am very much looking forward to wearing it later this month. Thank you! 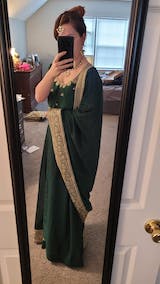 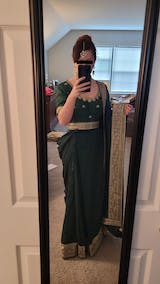 Absolutely love the Saree! The colors and flowers are just as beautiful in person as in the pictures. The material is so soft with immaculate stitching. The Saree came without any damage, stain or odd odor. The stitching was perfect and matched the measurements provided.I truly appreciate all th hard work your team has put in to provide this product and stitching service. I will definitely recommend this site.

I am happy customer. I really like the saree it's beautiful.